10 Things I'll Miss About Having A Brand New Baby


Bright and early Monday morning, I walked into Nathan's room and found him like this: 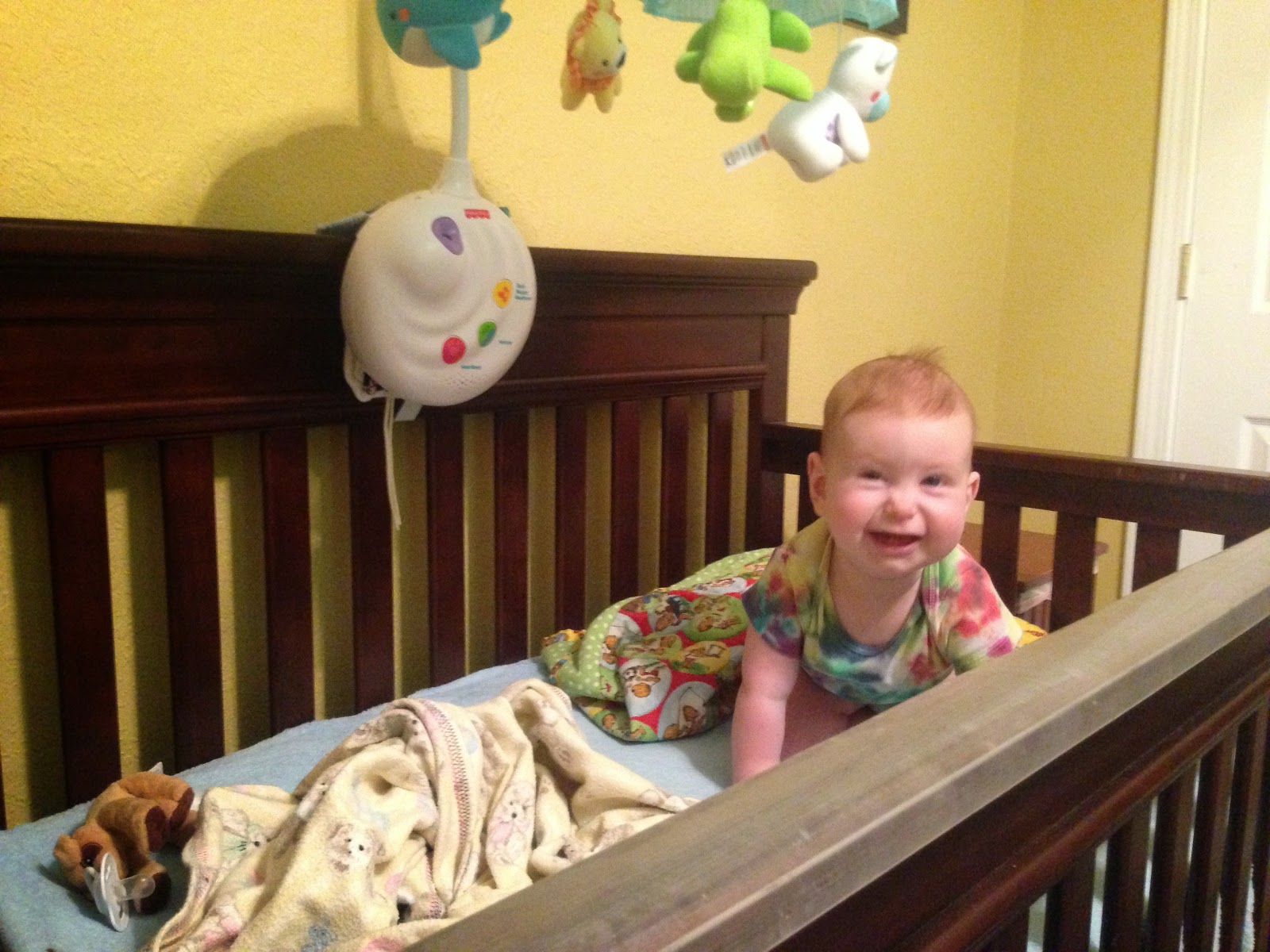 5 seconds after I took this picture, I moved one very important chore to the top of my "To Do" list: Lowering his crib mattress.

Dropping Nathan's mattress was a bittersweet moment to me, because it meant that my baby wasn't really a "baby" anymore. He's an infant. A Crawler. A Puller-Upper. An Almost-Walker. While that might seem trivial to some, it is painfully significant to me because to me, it feels like he's growing at warp speed. And I am NOT READY.

Maybe I'm borderline hyperventilating about all this because Nathan's my last baby, I'm really not sure. But I do know that after I finally wrestled and wrangled and got his mattress lowered (while in a room with three kids, a dog, and cradle full of 742 stuffed animals); I straightened up his nursery, put his blankets and toys away and started feeling super nostalgic. I'm not even ashamed to admit that my eyes got hot and my throat got tight and I may have cried a little because I realized in that moment that I will NEVER, EVER, EVER, EVER HAVE A LITTLE NEWBORN BABY AGAIN. Whaaaaaaaah.

So, in a {hopefully} therapeutic effort, I've compliled for myself a list of 10 things I will dearly miss about having a little bitty newborn baby. And I'm gonna share it with y'all. Here they are:


Despite my sadness at the fast rate that it's happening, I am glad Nathan's growing up. I'm glad he's here and happy and healthy. And whole. We went through a tremendously stressful pregnancy with him, and I realize what a blessing that is that after all the tests and scans and worries, he is perfect. He's our last baby, the one we didn't ask for, the one we can't imagine living without. He is the perfect piece to our family puzzle. We wouldn't be complete without him. He was the gift we never knew we needed to ask for. I'm grateful God's plans are bigger than mine. Nathan is a testament to that. I love you so much, my little bonus baby. While you may not have been planned, but you have always been loved. Our cups runneth over because of you.

If you are in the midst of a high risk pregnancy like we were, I'd like to share a verse that I clung to while we were traversing the endless doctor's appointments and ultrasounds and blood work and scans and tachycardia and trips to Labor and Delivery and almost C-sections. The entire chapter David wrote in Psalm 34 spoke to me, but verse 4 really touched my scared and tired soul:

"I sought the LORD, and He answered me and delivered me from all my fears."

What about YOU? I've given y'all my top ten list of things I'm gonna miss about having a new baby, what would be on yours?
Posted by Katie McReynolds at 7:28 AM 4 comments:

Anyone who's ever met my youngest, Nathan, knows that he's a fair skinned fella. 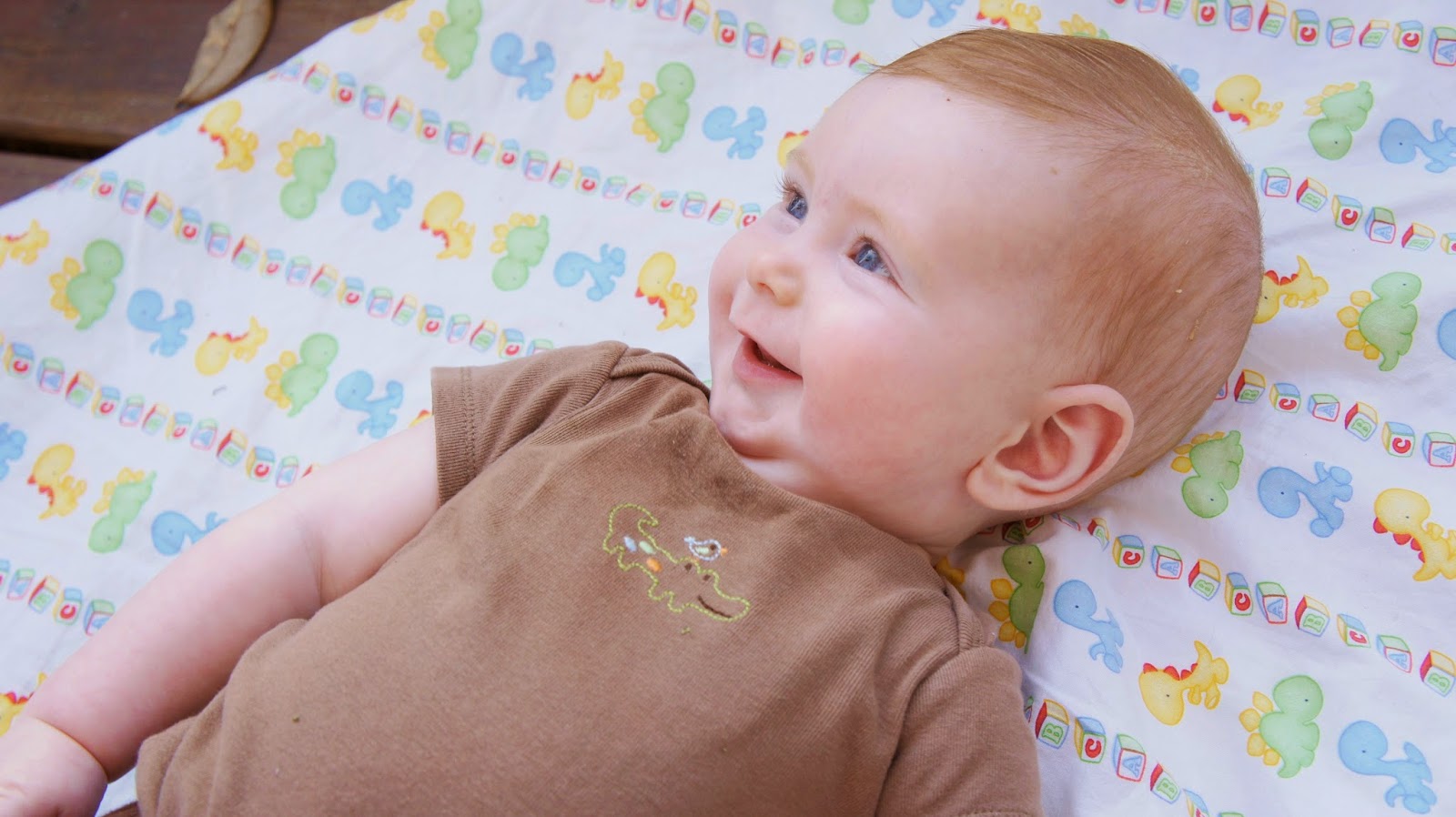 C'mon, y'all- Look at that skin. And the red hair!
He's an Irish lad, for sure.
(Photo courtesty of Dusti Randall)

Along with being my lightest skinned offspring, he's also the only one of mine to suffer with eczema. Both Luke and Jo managed to get through their babydom years without any major skin conditions. They had some minor bouts of cradle cap and that whole post-delivery-skin-molting/baby acne thing that all newborns go through, but that was about it for the both of them. Nathan, however, wasn't so lucky.

I first really noticed his symptoms when he was about 6 months old. We had gone to visit my Mom for Easter and, when I was changing his diaper after a particularly long afternoon out in the south Louisiana heat, I noticed some red, scaly patches had flared up back behind his knees. I'd seen them a time or two before our trip, but hadn't really made the connection between them and eczema until that day. When I had noticed them before, though they were mainly just kinda dry places that I'd feel when I was greasing him up with my traditional 14 pumps of Johnson & Johnson's after his bath at night. (I'm a chronic over-lotioner. I can't help it.)

So I'd noticed his dry patches before, but rubbing some coconut oil on them usually took care of them. I'd slather some on and forget about them. Like I said before, because neither of my other two chaps had eczema- I didn't really think much of it. When I saw them at my Mom's, though- they had changed. Gone were the tiny, dry white areas and in their place were large, red, flaky sploches that covered almost the back of his entire leg/knee fold area. Poor fella!

I sent out a mass Facebook post asking for advice, and my friends immediately jumped in to help me out. I didn't realize until that day how many of my friends' kids had eczema/skin conditions. I got lots of good advice, as well as ideas about things that could trigger a flare up and different products that are avaliable to treat them. Hearing their stories, with both their successes and failures, is what prompted me to write this post. Because when you find something that works- you want the whole world to know about it!

A friend of mine, Margo Baker of Happy Skin Soap, LLC, became the game changer in this whole eczema treatment battle I was in. She sent me an awesome box of goodies: 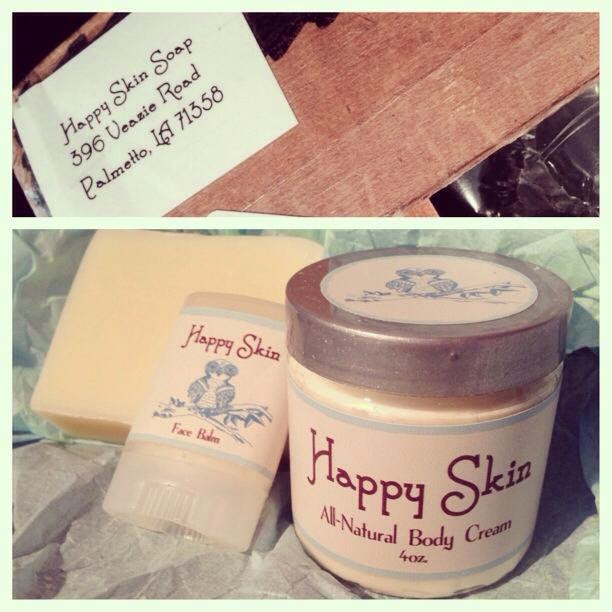 Her oldest daughter's breakouts promtped her, after trying multiple prescription and OTC methods that didn't work, to try her hand at making her own soap instead.  Her daughter's breakouts were gone within a week. She found so much success (and fun!) in soap making that she started mixing up various soaps and potions for her friends and family. One thing led to another and before she knew it: BAM! She was a small business owner. She's got tons and tons of different products to try- even if you don't have sensitive skin. As soon as this post is finished, I plan on doing some more browsing on her website and Facebook page. (She's got a diaper cream that I am dying to schmear all over Nathan's tush.)

After I perused through my goodie box, I immediately threw gently placed Nathan in the tub, anxious to try out all the things she'd sent me. Y'all. I was not disappointed. Her soap was incredibly mild, not terribly sudsy, and didn't seem to irritate his tender haunches. *I did keep it away from his eyes. I'm not 100% sure it's tearless. So use your best judgement, y'all.* But it even worked great in his hair- this kid's still rocking some cradle cap every now and again, even at 8 months old. Mercy, child.

I was happy with the soap, but y'all, I had no idea what was awaiting me. Once I opened her jar of body cream the skies parted and angels sang. I'm not really sure how Margo does whatever voodoo magic she does in her body cream making business, but IT IS AWESOME. I know she infuses olive oil with lavender and chamomile, but beyond that, I'm not quite sure. (Maybe it's not fit for mere mortals to know.)

It's literally perfection in a jar. It is a thick, whipped, delicious smelling tub of unicorns tears or Icelandic glacier water or drops of pure sunshine or something, I don't know what, but I know this: It cleared up Nathan's flare up in like 2 days flat. It's thick enough to cover nicely, (it's mega concentrated) but it still absorbs completely into their skin instead of rubbing off onto their clothes or blankets or towels or favorite stuffed animals or onto your two day old dirty Tshirt that you've still not changed out of at 7pm. I scoop some onto my fingertips, warm it up a little by rubbing them together, and then I focus on applying it to his trouble spots after every bath. And for Nathan, that means on his legs and arms. And boom, y'all- it's GONE.

I've been using her products on Nathan since Easter and y'all- he hasn't had a flare up since. While I'm still doing tons and tons and tons of research to try and find the root cause of Nathan's eczema flare ups, I am 100% relieved to know that I have found a line of products that I can trust to treat his skin when he flares up. If you or your little ones are suffering with eczema, I would strongly encourage you to check out Happy Skin Soap's line of baby products. They have worked wonderfully on sweet Nathan's skin and hopefully they'll help give your little one some relief, too!

And, even if your skin isn't as sensitive as my sweet Nathan's- check out her page anyway. She's got a Citrus & Spice blend of soaps and sugar scrubs that sounds positively divine. I'm dying to try her Lavender & Lemongrass soap soon, too! (Doesn't that blend just sound like summer?!!)

Do any of your children suffer from eczema? Have you been able to pinpoint a cause? Was it a food allergy? Humidity? Seasons? Pollen? Dust? Perfume?
Comment below and share any tips, tricks or suggestions if you have any. 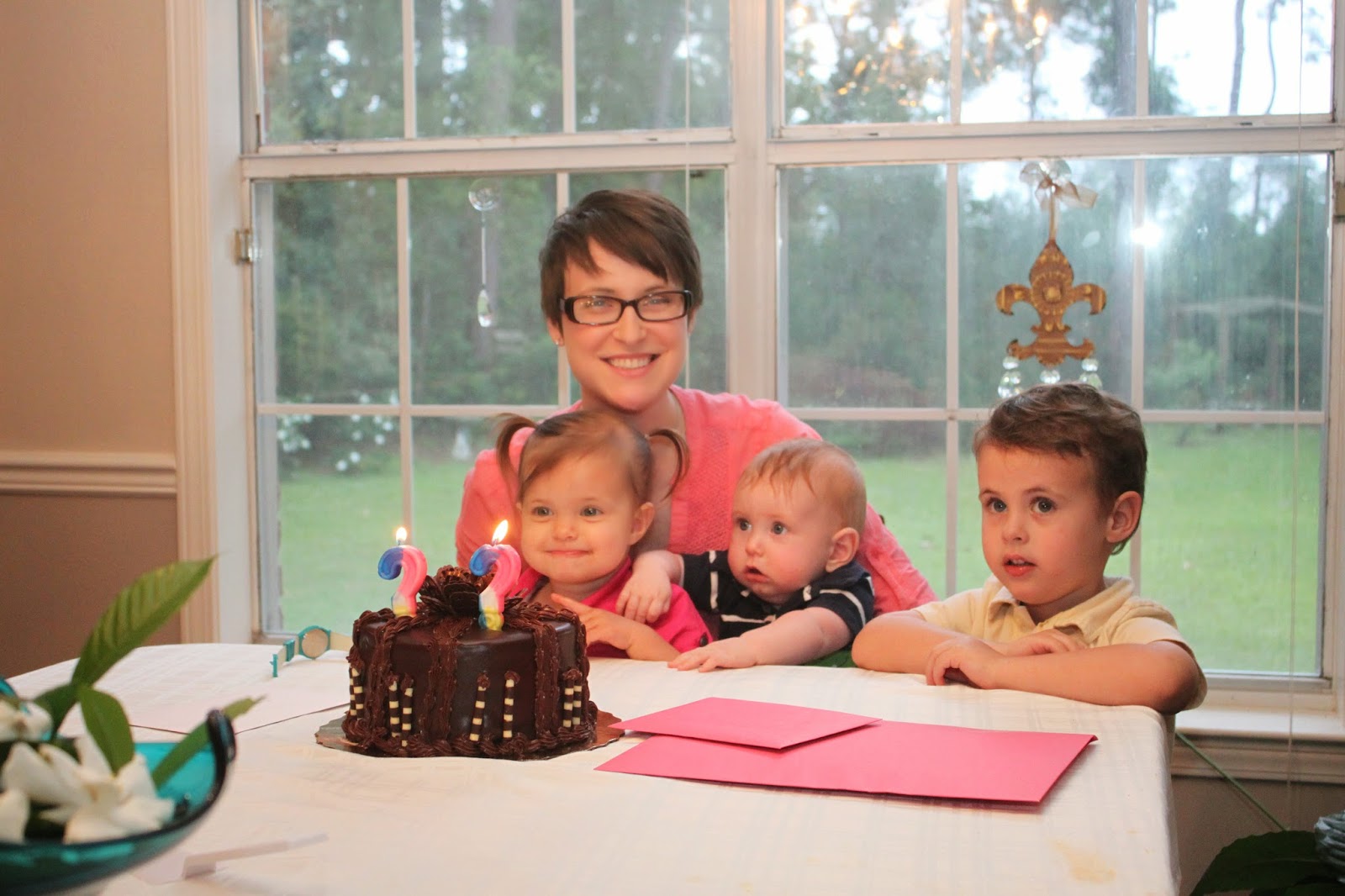 My youngest, Nathan's face says it all. It was big doin's.


It's not that I am opposed to aging. I get it. I'm getting older. I'm absolutely owning the first few dozens of gray hairs that I've recently discovered. They go along nicely with some crows feet and laugh lines that have started to appear in my bathroom mirror. That's not what's making me pause.

It's the fact that, with the official arrival of my 30's, I feel as if- by some cosmic power or biological force- I should have "it" together. My life. My house. Myself. I should be over being self conscious about my body, clothes, and personal style. I shouldn't be worrying about things I have no control over like other people's opinions or actions. I should "get it" by now, shouldn't I?

Life. Love. Happiness. Peace. It's like, when you think about life- about the passing of time and the journey that you travel down, your 30's are the years when you settle into yourself. You discover yourself in your 20's. You make peace with yourself in your 40's. But your 30's are the time when you curl comfortably into the person you've become. You light a candle, grab a cup of coffee, a comfy blanket, a good book and you settle down into yourself. Who you are. Who you've turned out to be. It's kinda freaking me out.

At least, that's what I want my 30's to be. I want to live this decade confidently knowing who I am. And, when I take this time to stop and settle and sigh into myself and maybe see something that I don't like- I AM GOING TO CHANGE IT. Because, y'all- I'm a grown up now. For real. I'm thirty years old. I can make choices and challenges and changes to make myself a better person. And I will.

Posted by Katie McReynolds at 6:44 AM 3 comments: