It's been about eight weeks since I've been able to post anything new around here and TRUST ME WHEN I SAY, it was not voluntarily. Because, apparently, running a computer with approximately 28K pictures clogging up your hard drive can, ermmm, slow things down a tad.

But my trusty laptop was released from the hospital this afternoon and I'm wasting NO TIME AT ALL gettin' back in mah groove. Because while things online may have quieted down over the last couple of months, rest assured when I say that they have in no way imaginable slacked off around my house.

The following are post topics that will be shared with y'all shortly:

*Josie's 3rd Birthday. (So.much.Strawberry.Shortcake.stuff.)
*A real life scientific experiment with 2% milk and house plants.
*A short story about that one time I thought it would be fun to apply undiluted peppermint oil to my forehead and temples. Spoiler alert: It wasn't.
*All things T-Ball related. ALL THE THINGS.
*Our upcoming 10th wedding anniversary because heaven sakes we have already been married for a decade, y'all. How did that happen? I'm still a newlywed!
*How to apply teal eyeshadow. Hint: DO NOT DO THAT THING. You'll look like a Miss PIggy/Madonna combo. Trust me on this one, friends.
*Holy Sandpaper.
*Momcation 2015. IT ROCKED.

And while I've been on sort of an accidental hiatus, and that's been a bummer, I believe it's also been a blessing. I've been able to use some of the extra time on my hands during the few moments each day that I actually do get to myself to redouble my efforts to own my attitude as a Mom.

Because, as the dynamics between the three kids has evolved into yet another level that I wasn't quite ready for, I realized that I was becoming much more reactionary in my parenting than as proactive as I had previously been when my youngest Nathan was smaller, even just a few weeks and months ago.

As you have more babies, can somebody tell me why they grow up so much faster?? Nathan's officially transitioned from being an innocent victim to a flagrant coconspirator with Luke and Josie. I'm legitimately triple teamed now, y'all.

BUT I AM NOT TAPPING OUT.
I'm owning my attitude as a Mom and I AM OWNING IT like a boss.

I read a quote during my studies that has ROCKED MY WORLD. I'll sum up like this: Your kids don't make you angry or frustrated or frazzled or short tempered. Your kids merely allow that shallow underbelly at the core of your character to be exposed as the pressures of caring for them strips away the fluff and fake smiles and blissfully happy social media presence you've worked so hard to make people believe is really real.

::BOOM::
(That was the sound of my world being rocked, in case you were wondering.)

In an effort to begin to own more of my attitude as a Mom, I made several copies of a verse that I tweaked a bit to fit my current life stage and taped them strategically throughout my house recently. 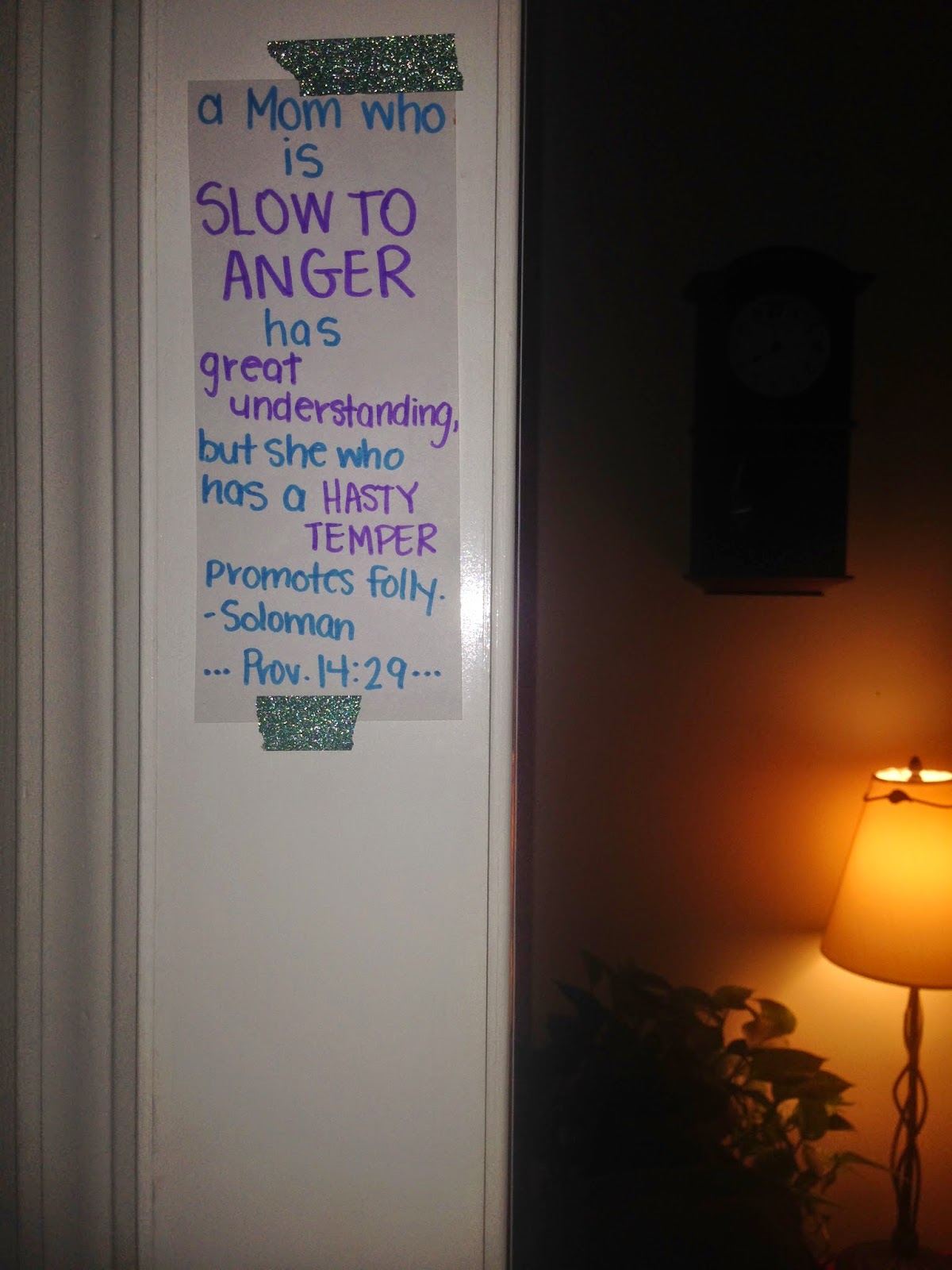 (See? Fancy schmancy- I know. But these are desperate times, y'all. It's the Katie McReynolds' version of Proverbs 14:29. Don't hate.)

And HERE COMES THE IRONY. Not 24 hours after I posted these suckers on doorposts and microwave doors and on my mantle, this happened: 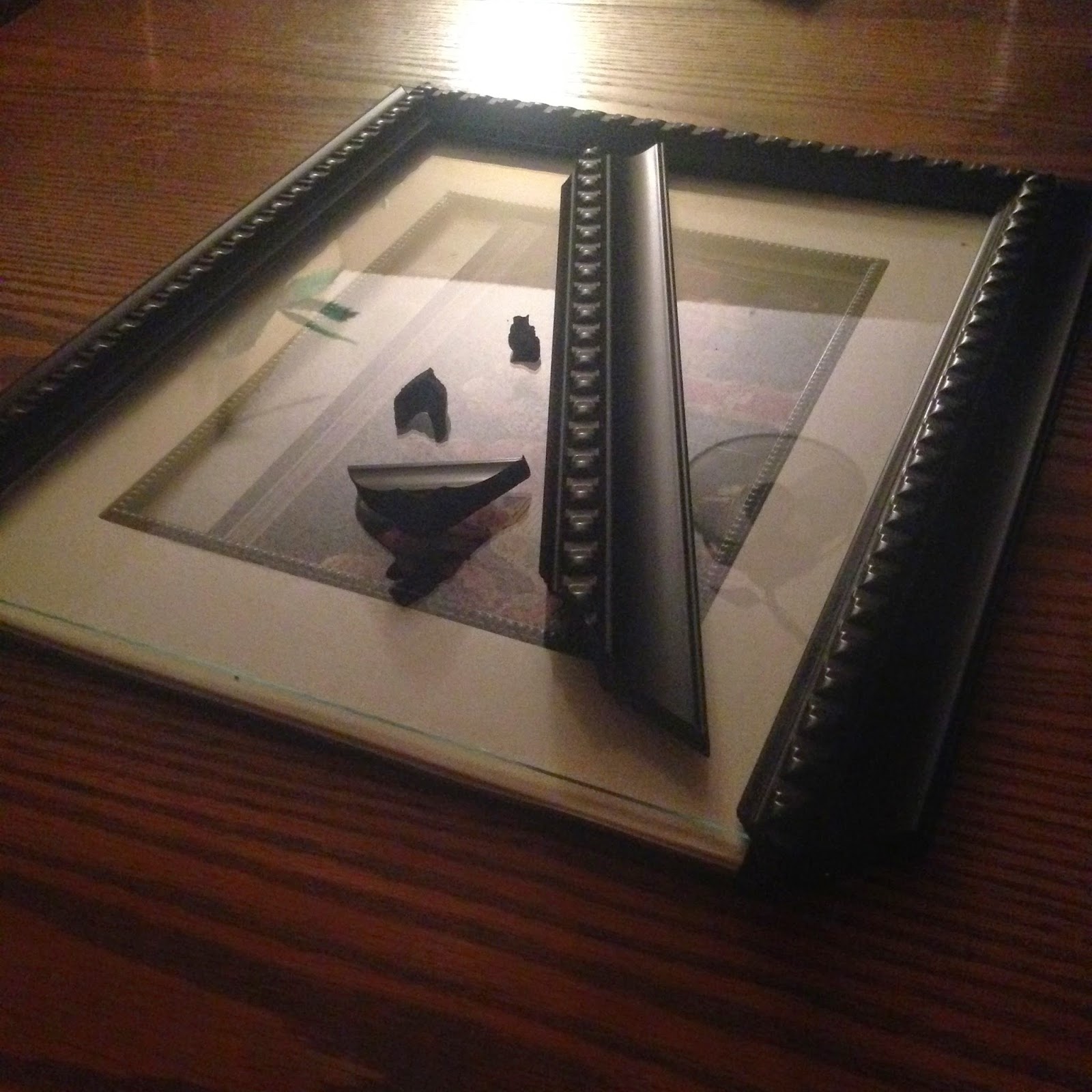 (Yeah- BECAUSE WHY WOULD IT NOT?)

I hung those cards around the house, and then later that very same day, my oldest knocked my biggest and most expensive family picture off of a wall in my living room. It took a lot not to go to that reactionary, screeching son-what-did-you-just-do-what-did-I-just-tell-you-about-balls-in-the-house kinda place. But, I didn't. I sent him to his bed while I took some deep breaths and prayed about how to best proactively discipline him instead of just flying off the handle and freaking out and then feeling like a horrible Mom 20 minutes later while we both cried ugly hot tears of frustration and guilty and sorrow.

IT WASN'T EASY. I WANTED TO RAISE MY VOICE. I WANTED TO CRY. (There was a part of me that wanted to scream like a banshee.) But, I didn't.

At the end of the it all, he was disciplined- not because my frame was broken, but because he disobeyed my instructions. He's going to work to make restitutions and help repay the cost of replacing my frame. But, if I'd flown off the handle and reacted to the situation and had been quick to anger and fuss and freak out and holler, I'm almost certain our outcome wouldn't have been that positive.

I'm sure this won't be the last time something will be broken. There may or may not have been a plate that fell onto the breakfast nook floor today and turned into about 1,492 tiny pieces of vintage Corelle dust. I know there will continue to be bumps in the road as I parent and raise and love these three crazy kids I get to call mine, and I'm grateful to have been given an accidental hiatus to give me the space and time I needed to help me see a new perspective and a better way to do it.

Here's to owning my heart and mind and volume level and attitude and reactions as a Mom.
May I always remember to be slow to anger so I can possess a greater understanding to parent them.
#lifelesson

Posted by Katie McReynolds at 10:22 PM No comments: Links to this post